Macaws are long-tailed, often very colorful neotropical parrots, native to Central and South America as well as the Caribbean. Not only do macaws have proportionately longer beaks, but they have a facial feather pattern that can be as unique as a human fingerprint. Check out the large selection of Macaws for sale, new macaws are added daily so be sure to come back if you do not find exactly what you are looking for. 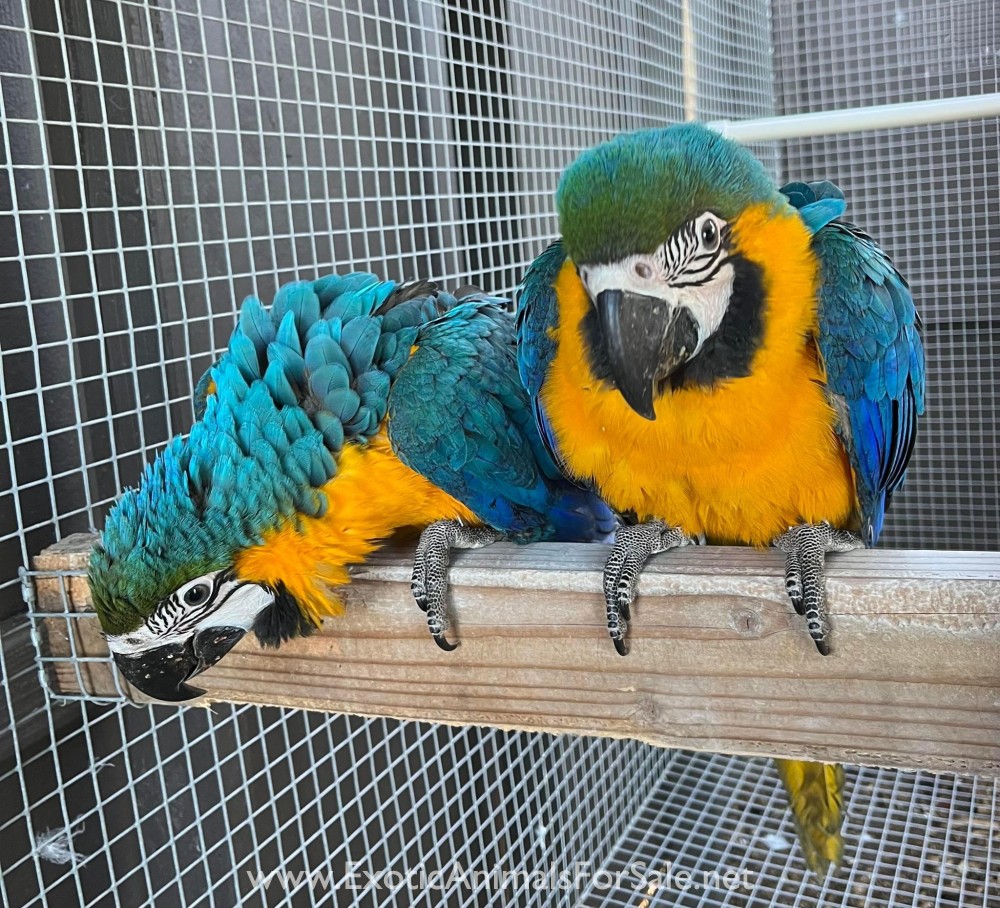 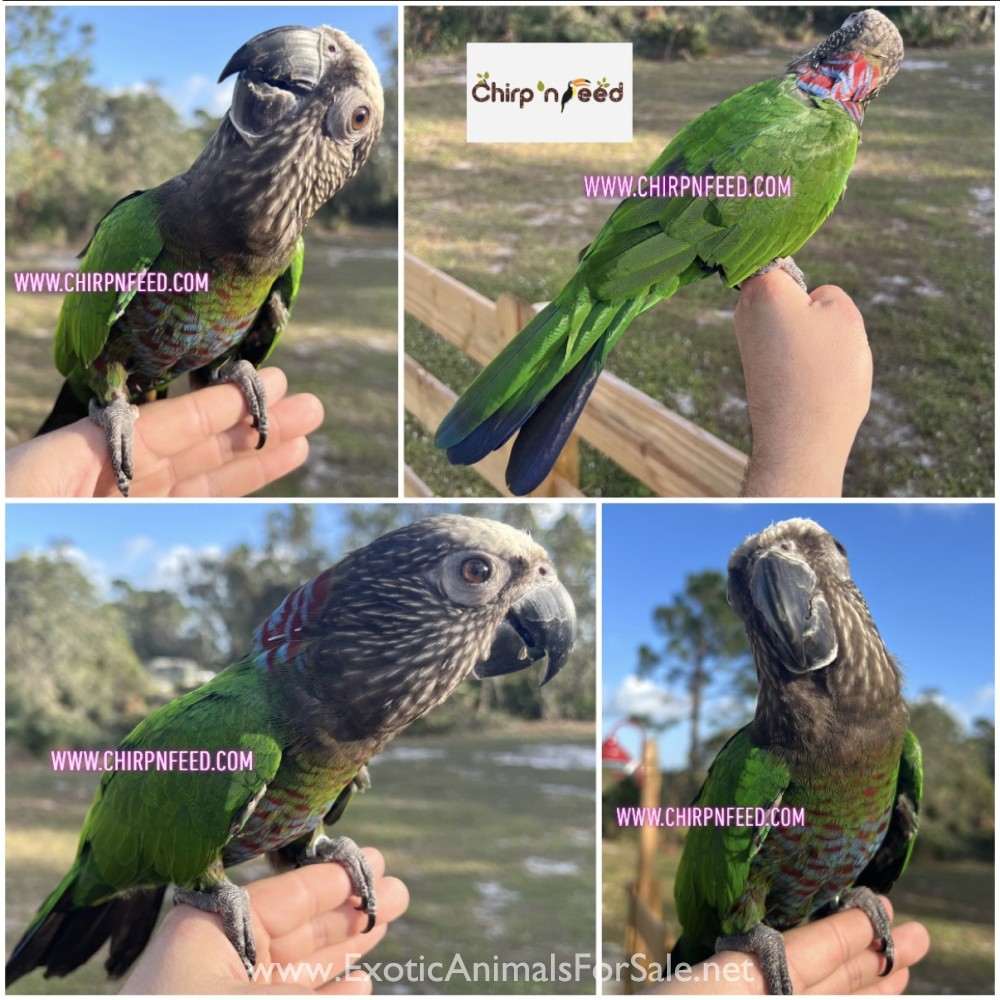 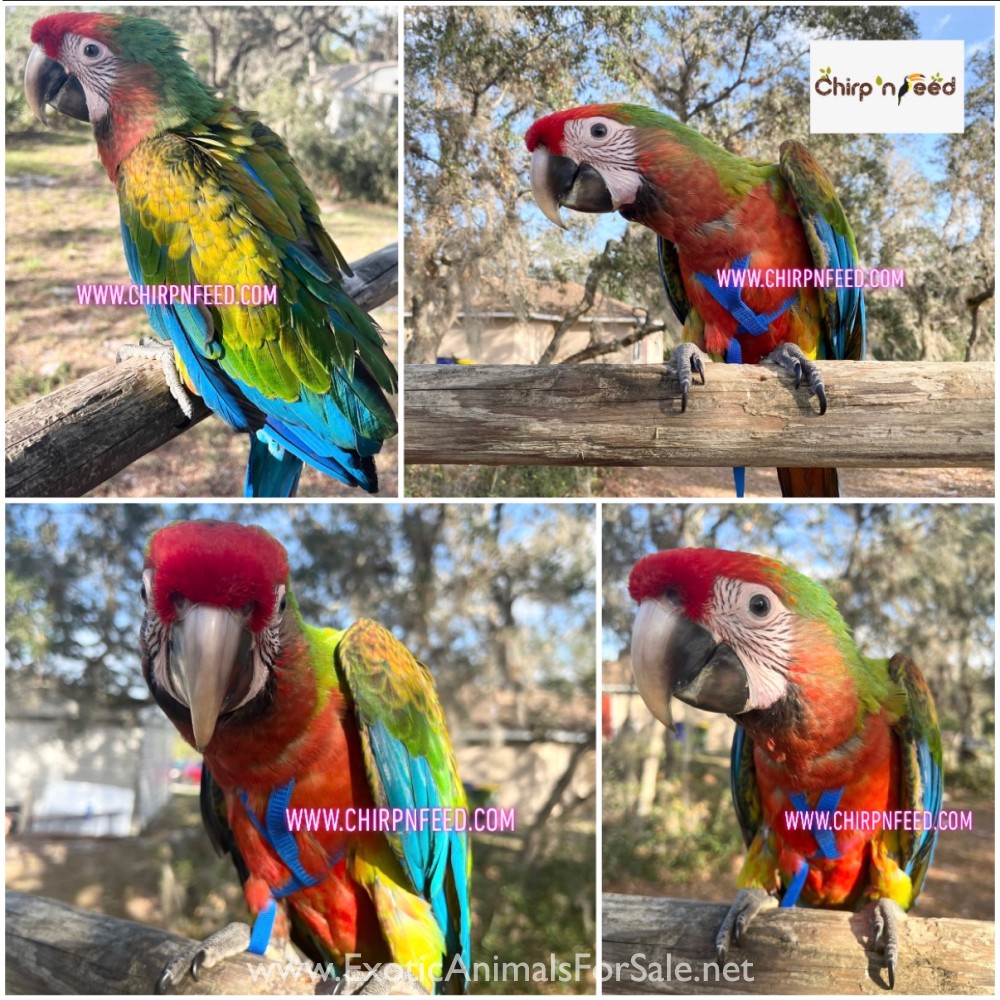 Accepting reservation on this absolutely beautiful shamrock macaw baby. The baby is currently being hand-fed and fully trained. She/ He will be on a healthy diet of organic pellets and vegetables. All our babies are very well socialized, tame and swe... 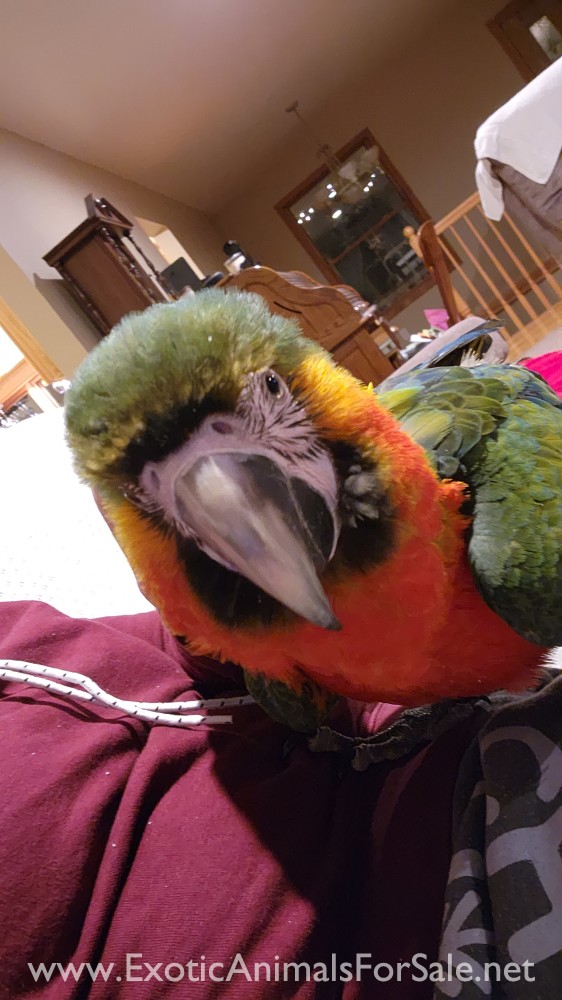 I have a Catalina Macaw ready for his forever home. He is a DNA male was hatched July 28th 2022. He is very friendly steps up well. Loves to be out of his cage he plays well on the java tree and he likes to be held and loved on. He isn't loud now he... 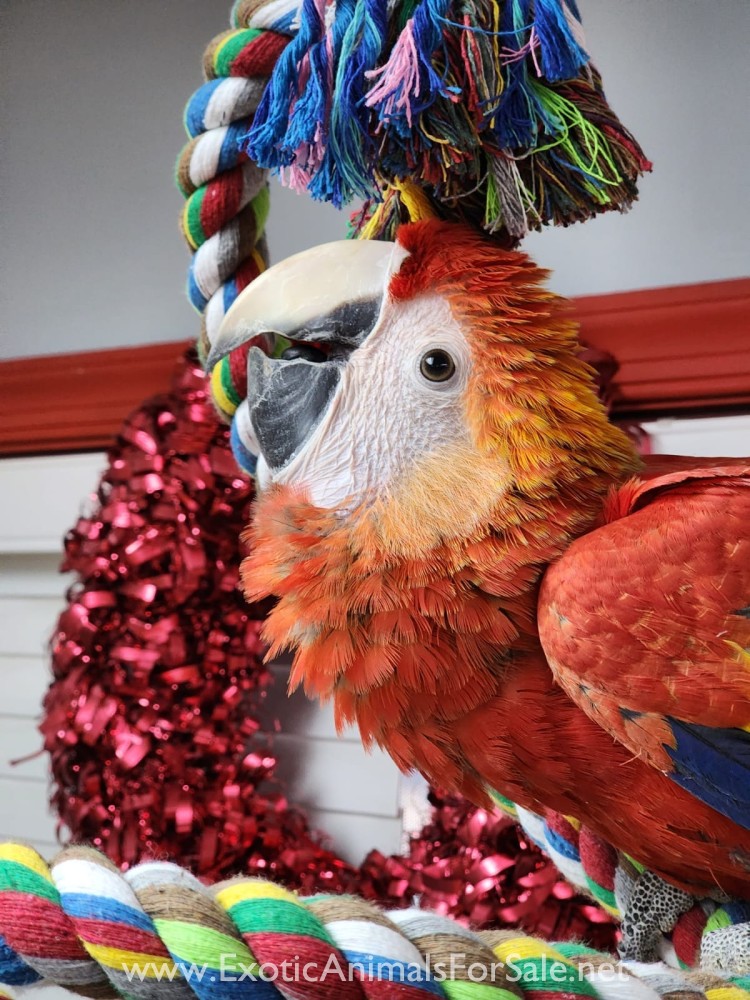 We have a gorgeous Scarlet macaw baby available. Simply flawless in every way! A strikingly beautiful bird both inside and out. We offer pick up at the store in Stroudsburg PA 18360. Any questions please call @646-496-5005. Thank you!

Baby Blue and Gold Macaw being handfed, only 3 weeks old. Will be available once fully weaned. Available for deposit. Will be DNA sexed once the baby is 6 weeks old. All our babies are weaned/being weaned to a pellet/veggie diet. We are licensed wi...

DNA male was hatched July 28 2022. He is on 1 hand feeding a day. He is very loveable and energetic baby who needs about 4hrs a day outside of the cage. Text or call for more info 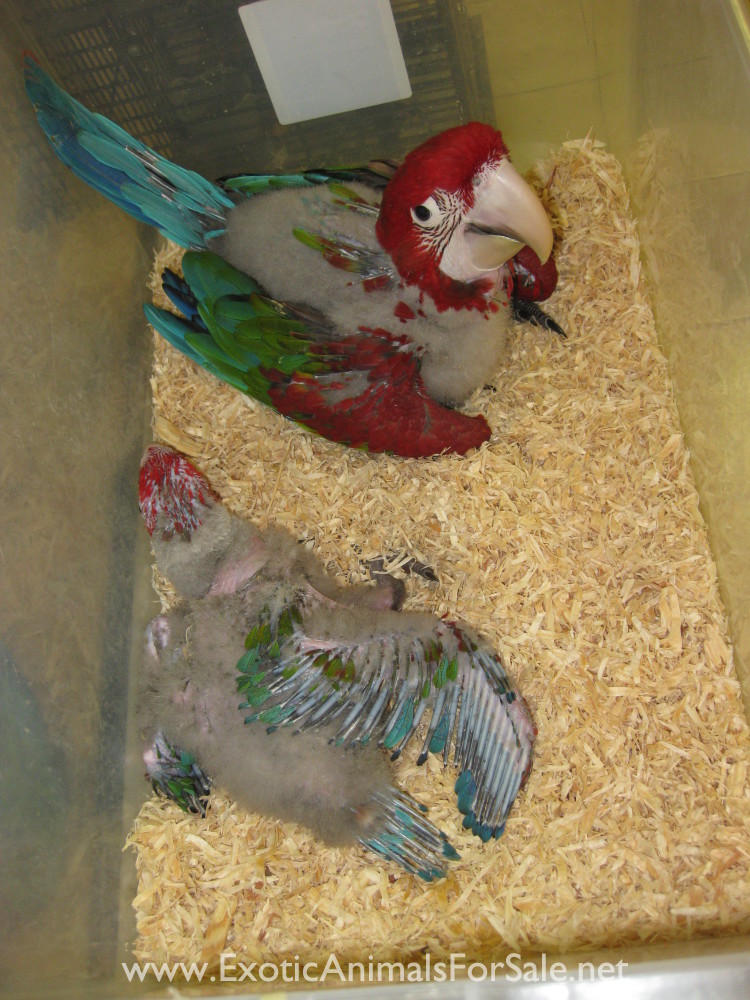 Just weaned MilliGold Macaw..Cross of a Blue and Gold and a Millitary. Super sweet, will step up to everyone.... 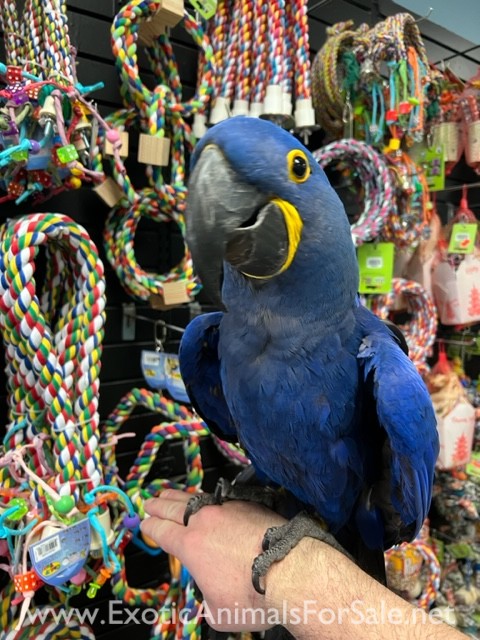 Adult Hyacinth Macaw available say hi to Corey he is sweet friendly and tame and does talk. Call us for more info 773-317-3785. 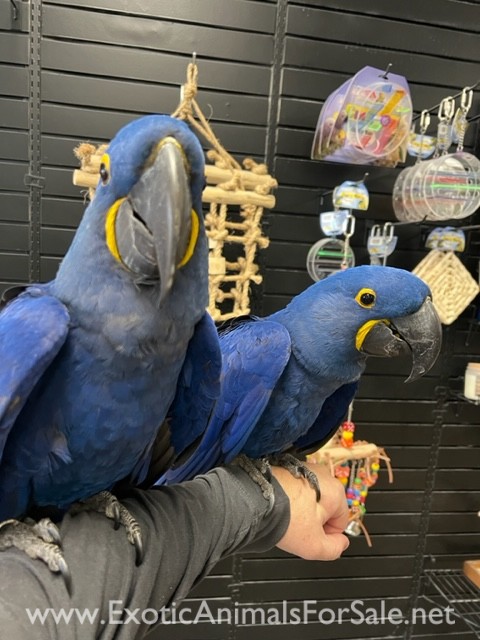 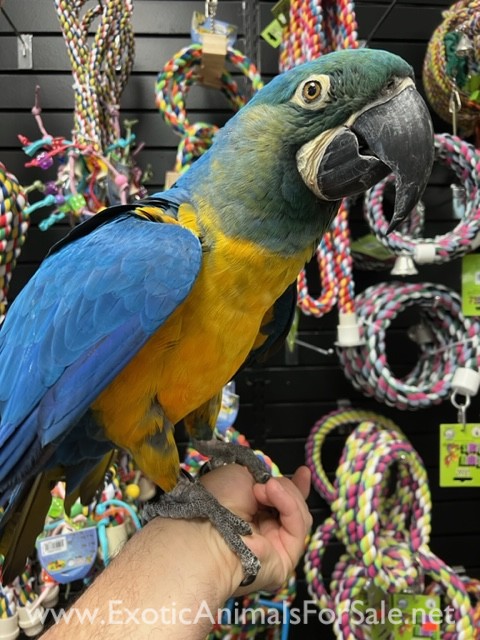 Beautiful Hybrid Hyacinths macaws available these Hybrids are something different and rare. Very tame and friendly, these are a cross between a Hyacinth Macaw and a Blue & Gold Macaw making this beautiful Hybrid Macaw. For more info call 773-317-3785... 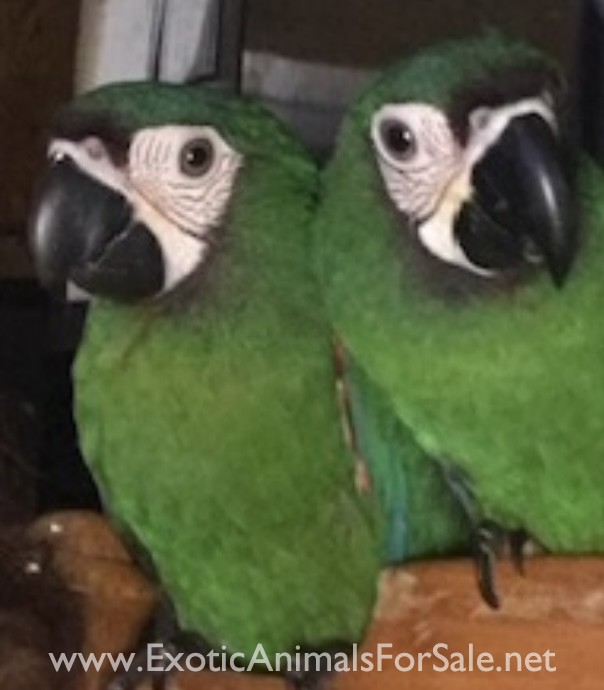 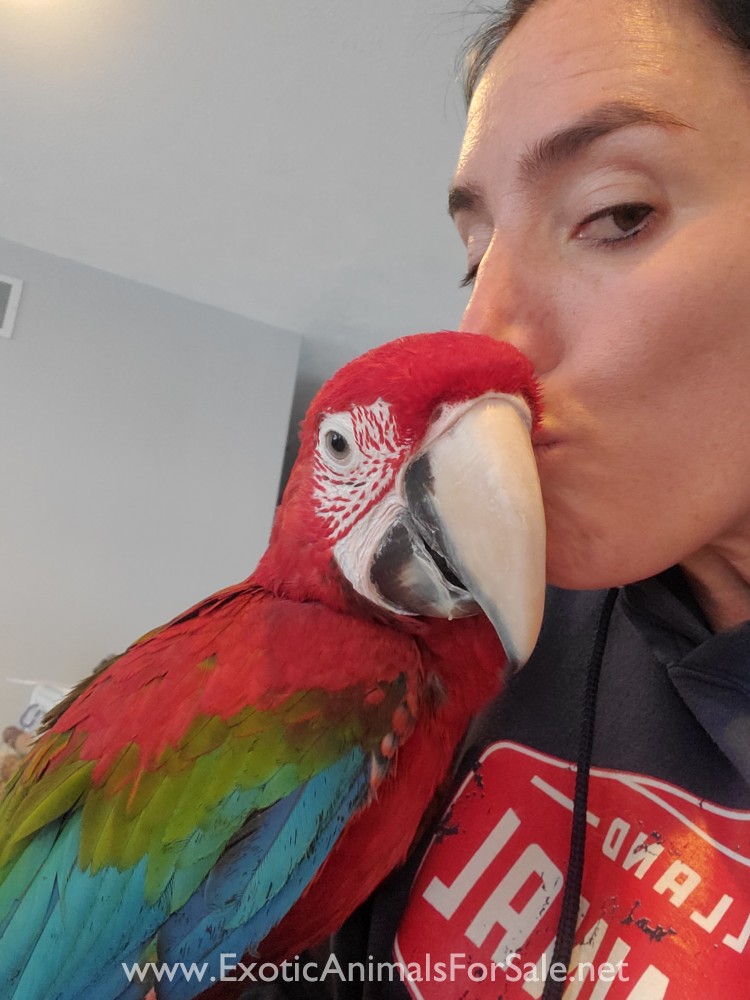 Types of Macaws for Sale

A Macaw's first and fourth toes point backwards like the toes of many parrots and toucans do. There are nineteen species of the Macaw bird and some are now extinct or critically endangered. The Hyacinth Macaw of South America is the largest (by length) in the world, measuring 3.3 feet long (100 cm) from the top of its head to the tip of its tail, a wingspan up to 56 inches (140 cm), and it is now on the list of endangered species. The Convention of International Trade of Endangered Species (known as CITES) regulates the international trade of all Macaw bird species. Because of the problems stemming from illegal international trade of the species for commercial purposes, if you wish to own a Macaw as a pet, it is best to buy only captive and bred Macaws with all of the proper certifications and paperwork. Some illegal traders will try to sell wild birds as captive-bred birds, which is illegal.

What do Macaws eat

The diet of a Macaw bird includes a wide variety of foods including fruits and nuts, flowers, leaves, and seeds. Some wild macaws are also known to be able to digest some toxic foods, and they neutralize this by eating clay, usually from river banks. Macaws generally have a lot of energy, and if they do not get enough exercise and are allowed to fly around, they might become obese if their food intake is too high or fatty. Macaws require a varied diet not only to boost their immune system, but also to make captive life less boring and monotonous. Since only wild macaws can digest toxins and neutralize it by eating clay, you must be sure to not feed your bird anything toxic to them, such as avocados. It is best to feed your bird a formulated mix of parrot food that comes with added vitamins. You should still supplement the parrot food with seeds, nuts, and fruit. You can also serve your bird very small portions of vegetables or cooked chicken.

While Macaws come in several different sizes, the larger the cage you buy for them the better off they will be. If your bird isn't given a chance to be active and exercise, move and fly around, then its body will deteriorate and lose muscle mass. Macaws also love to stay clean and preen themselves, so giving them a little shallow dish of water as a makeshift bathtub for them to bathe in will help. Clean water and food dishes for your bird must be a daily routine to keep, but cleaning the perches and cage floor can be a weekly chore. It is also best to clean the entire cage maybe once or twice a year. To keep the bird's beak in shape, it's also a good idea to keep a small mineral block in the cage. You possibly may need to trim the beak of your bird if it becomes deformed or overgrown. The same goes for the bird's nails. You might need to trim them manually if they aren't kept trimmed, which is best accomplished by having some sort of concrete or mineral block in the cage.

Macaw's are very intelligent birds that come with a sociable and curious personalities. If they are bored or deprived of attention, they can become depressed rather easily. Macaw's can be very playful and boisterous, and can not only mimic the sounds of their owner and other people, but they can mimic just about any sound in their surrounding environment.

To help keep your bird entertained and happy, it is important they have at least a couple of toys or activities to do. There are toys available that may mimic what the bird may do in the wild, such as forage packs. They are little boxes filled with nesting material you can add your bird's favorite food or treats to, and you can let them forage for it like they would in the wild. Other large bird toys include swings and birdie bagels (made of non-toxic cardboard) that they can tear into and shred to their delight. Cheap bird toys can include old phonebooks, cardboard tubes, and even scrap paper and boxes.

What diseases do macaws get?

Having good quality veterinary care for your bird is very important. Macaws do not get sick too much if they are properly cared for and fed the correct diet. When the bird does fall ill though, it can be somewhat difficult to diagnose what the problem may be. Some signs of illness for your bird include mood swings, loss of appetite, labored breathing, unusual feces, drooping wings, drooling, and apathy. Problems with their eyes may include partially closed or watery eyes and swollen eyelids. If any of these problems arise, it is probably best to let a veterinarian check out your bird. Macaws can have a lifespan of up to 55 years, so it's important that they don't become depressed and lonely. Around 40 years old, the bird will usually begin to show signs of old age. To avoid your bird getting depressed or bored during its long life, it is best to provide it with many toys and things to do, to keep the bird entertained throughout its life.

If you are looking for hybrid macaws, visit our Hybrid Macaws page.

No comments on this page yet. Be the first!